Breaking News
VIDEO: “We are in the heart of a...
Haniyeh Calls for Islamic World’s Firm Support for...
Syrian Army reveals its casualties from ‘israeli’ attack...
Watch: Turkish troops exit area surrounded by Syrian...
Sayyed Nasrallah: I Will Deliberately Delay Tackling Dangerous...
Iran announces first move against US for seizing...
Iran to provide full subsidy on electricity for...
Zionist forces fire over 20 phosphorous shells towards...
Iran Blasts Great Satan US for Reassuring ‘World’s...
IRGC seizes over 1 ton of illicit drug...
Home West AsiaSyria Al-Moallem: The real goal behind the so-celled Caesar Act is to open the door for the return of terrorism

Al-Moallem: The real goal behind the so-celled Caesar Act is to open the door for the return of terrorism

Deputy prime Minister, Foreign and Expatriates Minister, Walid Al-Moallem said that the real goal behind the so-called “Caesar Act” is to open the door for terrorism to return to Syria as in 2011 and to force Syria to give up its alliance with the resistance.

In a press conference on Tuesday, al-Moallem said that the statements made by Mike Pompeo and James Jeffery about the so called “Caesar Act” prove that they are all liars because if they wanted the good for the Syrian people, they wouldn’t conspire against their livelihood. 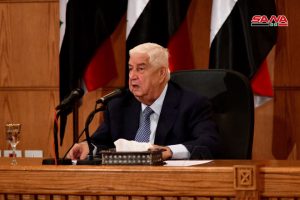 He stressed that there are no exceptions in the so-called “Caesar Act” and that the Americans lie when they claim that this Act doesn’t include medical supplies and food.

The Deputy Prime Minister said that the Syrian people are used to dealing with unilateral sanctions that have been imposed on them since 1978 under several terms.

He added that the act should be turned into an opportunity for the Syrian people to perk up their economy, achieve self-sufficiency and deepen cooperation with friends and allies in all domains, underlining that Syria’s war on terrorism will not stop.

Al-Maollem wondered if the presence of US forces around Syrian oil fields, the burning of wheat fields and the US threat to friendly countries that want to contribute to reconstructing in Syria serve the interests of the Syrian people.

He said that the US occupation forces are investing in terrorism and this was proven in transporting leaders of Daesh terrorist organizations by their helicopters to Iraq and in supporting Jabhat al-Nusra and the Turkish regime in their aggression on Syria.

He said that the US defends Israeli interests and its withdrawal from the region is inevitable.

Al-Moallem added that Turkey occupies territories from Syria and the lessons of history have thought that the peoples which struggle for the sake of their freedom and sovereignty will win at the end.

On the political track, Al-Moallem affirmed Syria’s commitment to the process of finding a political solution to the crisis in the country and its rejection of any American or non-American foreign interference in the work of the Committee of Constitution, which must be a Syrian-led process away from any foreign interference.

He emphasized that the Syrian people will not allow anyone to interfere in their constitution and will only accept a national constitution that meets their aspirations. 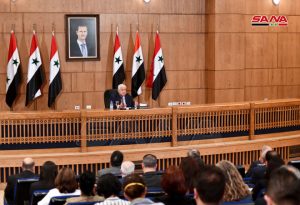 The Deputy Prime Minister renewed that the Syrian people are the only ones who will decide their future and Trump, Pompeo and Jeffrey are not entitled to speak about it.

Al-Moallem affirmed that Syria is determined to stand by the Palestinian people and it rejects the Israeli occupation plots to annex territories from the west Bank, adding that Israel must withdraw from all occupied Arab lands.

He asserted that Syria backs the Libyan National Army and institutions as well as the Libyan sovereignty and territorial integrity. He also reiterated Syria’s support for Egypt’s national security.

Al-Moallem added that, in brief, the United States wants from the so-called “Caesar act “and other previous acts to abandon our alliances and our support for the resistance and going in the track of Normalization with Israel and accepting the Israeli plots outlined for the region, on top of it is the so-called  “deal of the century.”

Regarding the repercussions of the US act on the relationships with Arab countries, al-Moallem said that UAE is a fraternal country that rushed to open its embassy in Damascus and Syria and welcomes any Emirati step to enhance relations with Syria, regardless of James Jeffrey warning.

In response to a question about the situation in Idlib, Al-Moallem indicated that Syria behaves according to the priorities and capabilities available and  its dialogue with the allies, especially the Russian  side.

In regards to Sochi agreement, al-Moallem affirmed that there is a cessation of hostilities in Idlib and when we see the terrorists do not commit to it, our armed forces will respond to them directly, and when the time comes for liberation, we will see legions have been launched, but this decision would be taken by the military command.

He pointed out that one of the aims of “Caesar Act ” is to affect the next presidential elections and whoever says otherwise is mistaken, indicating that President Bashar al-Assad constantly says” as long as the people want me to remain , I will remain,” so the decision is in the hands of the Syrian citizens, not in the hands of James Jeffrey or Mike Pompeo.

Iran announces first move against US for seizing...

Iran to provide full subsidy on electricity for...

The water of Religion Tree is the blood of martyrs. Ustad Hizbullah HAKVERDI

This website uses cookies to improve your experience. We'll assume you're ok with this, but you can opt-out if you wish. Accept Read More